The race explained - in English

The Warszawa – Praha – Berlin is a 1,300km 8-day stage race following the route of the legendary and now defunct Peace Race. Races’ parcours leads from Warsaw through Prague to Berlin – in total competitors will cover approx. 1,300 km divided into eight stages.

Competitors will navigate the route on their own basing on the roadbook provided by the organizers - they will also receive gpx files with suggested route of each stage. Stages will begin with a mass start. In order to get to the finish of the stage competitors will have to ride through checkpoints and upload their position to races’ social media. In addidtion to GC, there will be points and mountian classifications.

No entry fee, no race officials just spirit of fair play and pure love of cycling. Long story short: three countries, two mountain ranges, hills, cobblestones, stadiums and places which witnessed history of the “Grand Tour of the Eastern Block”.
Let's just meet up to ride the classic route of the Peace Race and see who can do it in the shortest time! 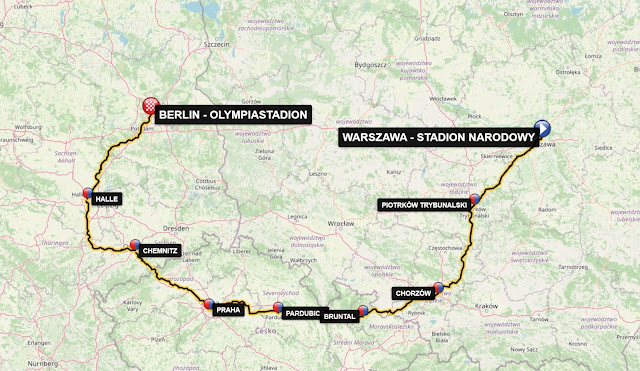 Maps, profiles and tracks of all stages you will find here.

How to get in touch?

Here you can register for the race.
Interested? Considering participation? Or maybe you need more information?
Drop me an e-mail on: wyscig.wpb@gmail.com
If you want to stay updated follow the race on facebook.com/warszawa.praha.berlin. Yes, the page is in Polish, but do not hesitate to ask for translation or explanation whenever you need.
You can also join our group on Facebook, which is the best way to stay in touch with other people interested in WPB!